Solar energy is something all of us are familiar with, whether we know it or not. When you feel the warm morning sun on your face, wipe the sweat from your forehead on a hot afternoon, or even feel your skin burning after spending a long day outside, you’ve felt the effects of solar radiation. In fact, the sun affects almost every aspect of our lives on this planet, from the time of sunset and sunrise to the daily weather. But the sun’s power can also be harnessed and used to provide us with a clean, renewable energy source. Today, solar energy is widely used by numerous people around the world. 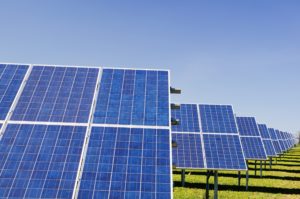 While everybody knows about solar power, however, not everybody understands how solar energy works. How exactly can we capture this invisible energy and use it to power our homes? How does something that looks as simple as a solar panel to transform the sun’s energy into something usable? Here is a guide to help you understand how solar energy works.

Have you ever wondered what a ray of light was made of? The answer is complex, but essentially, visible light is composed of elementary particles known as photons. These particles have no mass and no charge, and they move at the speed of light. When you see the sun shine, what you’re really seeing is the bombardment of the Earth with an enormous number of photons. This is the source of the energy that your solar installation is harnessing and putting to use in your building.

Solar power is based on a natural phenomenon known as the photoelectric effect. When the photons in sunlight strike a solid material, it can cause the release of electrons—or, in other words, the release of electricity. Essentially, the light pushes the electrons loose from the solid. First discovered in 1887, the photoelectric effect was a landmark discovery in the development of quantum physics and modern science. However, it also made solar power—as we know it today—possible.

In the 1950’s, the first working photovoltaic cell was developed at Bell Laboratories in New Jersey. A photovoltaic (PV) cell is made using silicon and other substances that are considered to be semiconductor materials. This means that they are capable of conducting electricity under certain conditions. Most PV cells are made of two layers of silicon crystals. Each of these layers is doped—which means that impurities are introduced—with a different substance; one is doped with boron and the other is doped with phosphorus. The layer that includes boron has a positive charge, while the layer with phosphorus has a negative charge. This enables the cell to create an electric current.

A single solar panel contains a large number of PV cells. When sunlight strikes the PV cells, it causes some of the electrons in the silicon inside the PV cells to become dislodged. This creates an electric current inside the solar panel, which is then transferred to a power inverter. Once the electric current has been turned into an alternating current by the power inverter, it can be used to provide power for a home or business. The process is simple, and it can be repeated endlessly.

The benefits of capturing and using solar power as an alternative source of energy are clear. After all, solar is free, it’s clean, and it doesn’t pose any serious environmental hazards. It’s also a cost-effective energy source for many homeowners, especially considering that so many government incentives are now available to reduce the cost associated with purchasing solar equipment. In addition, homeowners who are mulling over the idea of going solar aren’t alone—it’s fast becoming one of the most popular renewable energy options in the country.

Having a solar installation will help you save money on your utility bills.

One of the most common reasons homeowners decide to go solar is that it helps them reduce the amount of energy they pay for every month on their electricity bills. Most homeowners use a great deal of energy every month, and the additional energy that comes from a solar installation can effectively complement traditional energy sources and help homeowners save money. How much money can you expect to save? The answer depends largely on where you live and how much sunlight you receive, as well as the size of your household and how much energy you need to power your home. According to one estimate, an Arizona homeowner who uses a solar installation can expect to save $16,866 over a 20-year period. Learn more about why you should consider investing in a home solar installation.

Want to know how much exactly you will save by going Solar? Contact us today to get a FREE solar estimate that gives you clear, accurate information on how much solar will cost your home and how much you can save! Our team of experts is ready to answer all your questions and make sure we set you up for success. It’s easy and takes very little time. Call us now at 520-247-3060 or claim your solar evaluation online here.